In this video, we try to understand the motivation behind Bayesian Logistic regression and how it can be implemented.

Logistic Regression is one of the most popular ML models used for classification. It is a generalized linear model where the probability of success can be expressed as a sigmoid of a linear transformation of the features (for binary classification).

What we assume here is that we trust the model fully and rely on the probability of success computed from the model for a new point, to take a call.

How do we figure out that we cannot be confidant about this learnt model since we do not have enough data ?

Bayesian Modeling is a paradigm to start with a prior distribution for our parameters. And refine it based on data to learn a posterior distribution. If we see more data, we end up with a peaked posterior that is well refined by the data, else our posterior might be close to the prior when we do not have enough data.

To build models in a Bayesian fashion, it is common to write the *generative process* through which the observed data (in our example the loan approval predictions) are generated.

Inference process involves finding the posterior distribution given the prior and the observed data.

We can write the generative process for Bayesian Logistic Regression as follows: 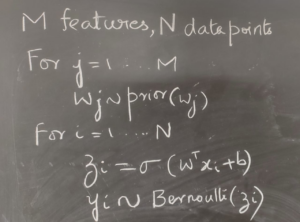 Inference involves finding the posterior distribution of the unknowns given the parameters.

However, the usual way to solve this has been through approximate inference techniques such as variational inference and gibbs sampling with handwritten updates.

This can be made easy with tensorflow probability by thinking of logistic regression as a simple feedforward bayesian neural network, where the weights have prior distribution. 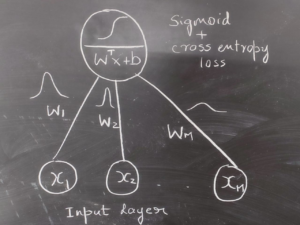 Check out the following links for an implementation of Bayesian Logistic Regression with tensorflow probability.